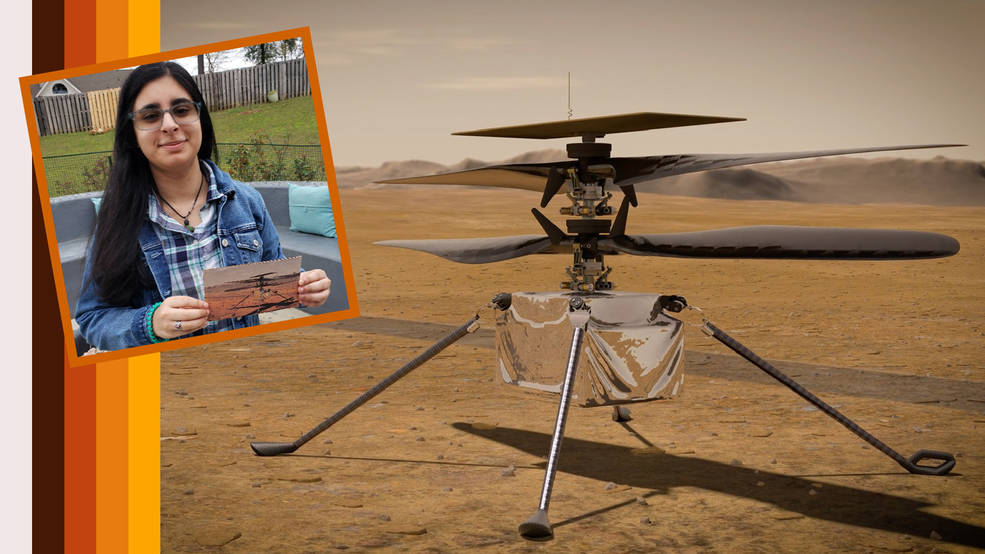 Vaneeza Rupani (inset), a junior at Tuscaloosa County High School in Northport, Alabama, came up with the name Ingenuity for NASA’s Mars Helicopter (an artist’s impression of which is seen here) and the motivation behind it during NASA’s “Name the Rover” essay contest.
Credits: NASA/JPL-Caltech/NIA/Rupani Family

Destined to become the first aircraft to attempt powered flight on another planet, NASA’s Mars Helicopter officially has received a new name: Ingenuity.

Vaneeza Rupani, a junior at Tuscaloosa County High School in Northport, Alabama, came up with the name and the motivation behind it during NASA’s “Name the Rover” essay contest.

Q&A with the student who named Ingenuity

“The ingenuity and brilliance of people working hard to overcome the challenges of interplanetary travel are what allow us all to experience the wonders of space exploration,” Rupani wrote in her contest submission. “Ingenuity is what allows people to accomplish amazing things, and it allows us to expand our horizons to the edges of the universe.”

Rupani’s was among 28,000 essays submitted to NASA by K-12 students from every U.S. state and territory recommending names for the the next Mars rover. In March, the agency announced that seventh-grader Alexander Mather’s essay earned him the honor of naming the rover Perseverance. But with so many good essays, it seemed fitting to also choose a name for the helicopter that will accompany the rover to Mars. So NASA officials went back to the submitted essays to choose a name for the helicopter. Thomas Zurbuchen, associate administrator of NASA’s Science Mission Directorate, made the choice for the rover’s name, and NASA Administrator Jim Bridenstine chose the name for the helicopter.

The first aircraft that will attempt powered flight on another world has a new name! Meet Ingenuity – NASA’s Mars Helicopter. And the inspiration for the name? We owe that credit to Vaneeza Rupani, an 11th grader from Northport, Alabama.

“Ingenuity encapsulates the values that our helicopter tech demo will showcase for everyone when it takes off next year as the first aircraft on another planet’s surface,” said Bridenstine. “It took a lot of hard and ingenious work to get the helicopter ready and then placed on the rover, and there’s a lot more going to be required. I was happy we had another great name from the naming contest finalists from which I was able to select something so representative of this exciting part of our next mission to Mars.”

NASA’s Mars Helicopter, Ingenuity, is set to arrive at the Red Planet on Feb. 18, 2021. Its mission: to demonstrate the first powered flight on another world.

“I am proud that NASA’s Mars Helicopter will be named by Vaneeza Rupani of Northport, Alabama,” said Sen. Richard Shelby of Alabama. “This is a unique privilege. Ms. Rupani’s essay on why she chose the name ‘Ingenuity’ highlights her creativity, originality, and intelligence. Her grasp on the importance of exploration is extraordinary, and I am confident that she has a bright future ahead. Congratulations to Ms. Rupani on being selected for this prestigious honor.”

As a technology demonstration, Ingenuity is a high-risk, high-reward experiment. The helicopter will ride to Mars attached to the belly of the Perseverance rover, which is preparing for launch in July or August. For several months following the rover’s landing, Ingenuity will remain encapsulated in a protective cover to shield it from debris during entry, descent and landing. When the timing in the rover mission is right, Ingenuity will be deployed to stand and operate on its own on the surface of the Red Planet. If the 4-pound (2-kilogram), solar-powered craft — a combination of specially designed components and off-the-shelf parts — survives the cold Martian nights during its pre-flight checkout, the team will proceed with testing.

If successful during its 30-Martian-day (31-Earth-day) experimental flight test window, the small craft will prove that powered flight can be achieved at Mars, enabling future Mars missions to better utilize second-generation helicopters to add an aerial dimension to their explorations. 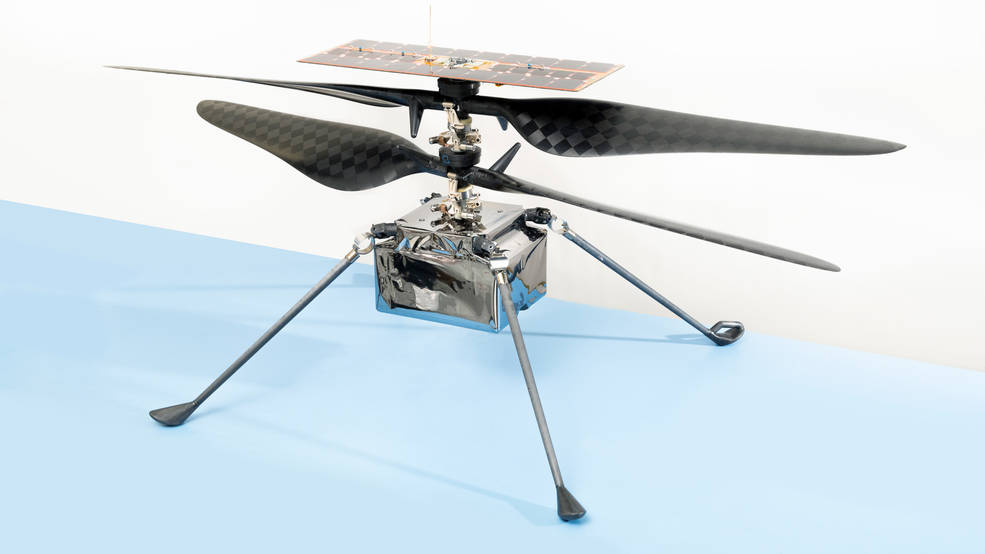 The helicopter successfully completed its flight-testing program using the 25-foot space simulation chamber at NASA’s Jet Propulsion Laboratory in Southern California. The next flight attempt will be in the actual environment of Mars. And if Ingenuity encounters difficulties, engineers will apply the lessons learned to future technology demonstrations. The science-gathering portion of the Mars 2020 mission will not be impacted.

“In the early days of this project, the feasibility of flying at Mars was questioned,” said MiMi Aung, Mars Helicopter project manager at JPL. “But today we have a helicopter down at the launch site, installed on the rover and waiting to board the rocket which will carry us to the Red Planet. Like Vaneeza said in her essay, ingenuity and hard work led us to see beyond what was logical to what was possible. Now Ingenuity will have its chance to fly at Mars.” 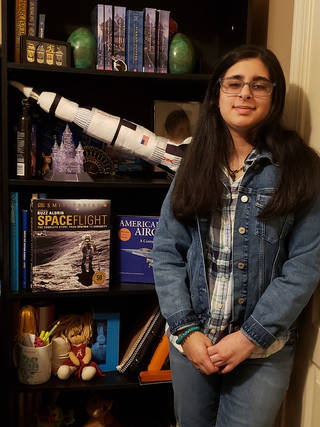 Along with investigating difficult-to-reach targets, such as cliffs, caves and deep craters, future aircraft could carry small science instruments or act as scouts for human and robotic explorers on Mars or other celestial bodies.

NASA’s Perseverance rover and Ingenuity helicopter are currently undergoing final assembly and checkout at the agency’s Kennedy Space Center in Florida. They will launch on a United Launch Alliance Atlas V rocket from Space Launch Complex 41 at nearby Cape Canaveral Air Force Station in July and land at Mars’ Jezero Crater on Feb. 18, 2021.

Members of the public and media interested in learning more about the Ingenuity helicopter can ask questions on social media using the hashtag #AskNASA. JPL will share some of these questions with Aung, the helicopter project manager, and release a video at 1 p.m. PDT (4 p.m. EDT) today, April 29, with a live moderated chat. The video will premiere at:

JPL is building and will manage operations of Perseverance and Ingenuity for the agency. NASA’s Launch Services Program, based at Kennedy, is responsible for launch management. Lockheed Martin Space in Boulder, Colorado, provided the Mars Helicopter Delivery System. Caltech in Pasadena, California, manages JPL for NASA.

The “Name the Rover” contest partnership was part of a Space Act Agreement in educational and public outreach efforts between NASA, Battelle of Columbus, Ohio, and Future Engineers of Burbank, California. Amazon Web Services is an additional prize provider for the contest.

The Mars 2020 Perseverance rover mission is part of a larger program that includes missions to the Moon as a way to prepare for human exploration of the Red Planet. Through its Artemis program, NASA intends to land the first woman and the next man on the lunar surface in 2024 and establish a sustained human presence on and around the Moon by 2028, using it as a stepping stone to sending astronauts to Mars.

For more information about Ingenuity, go to:

A variety of Mars-themed educational resources, including instructions for making a paper Mars helicopter, as well as a Mars helicopter coding video game, are available at:

For more information about the Mars 2020 mission, go to:

For more about NASA’s Moon to Mars plans, visit: